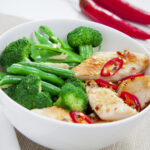 Carbohydrates, sometimes called “carbs”, are a source of energy found in grains, fruits, vegetables, and dairy foods. Carbs supply your body with the glucose (sugar) it needs for energy. Extra glucose is stored in your muscles and liver as glycogen, which can be broken down to glucose if your body needs quick energy. If glycogen stores are filled, glucose is then stored as fat, your body’s energy reserve.

There are two types of carbs: simple and complex.

Simple carbohydrates (also called sugars) are absorbed quickly by the body and will give you energy fast. Sugars taste sweet and are found naturally in some nutritious foods like fruits and milk. Other times, sugars are added to foods (also known as added sugars) that often have less nutritional value. For example, foods with high amounts of added sugars include soda, cookies, candy, and some cereals. Both added and natural sugars are listed on the nutrition facts label. Another place on a food label that can give you information about added sugars is the ingredient list. Common terms for added sugars include sucrose, sugar, and high fructose corn syrup.

No. Carbs are found naturally in many nutritious foods such as fruits, vegetables, beans, whole grains, milk, and yogurt. Some people think that eating carbs will make them gain weight, but carbs, just like all other nutrients, will get stored as fat only if you eat more than your body needs. There are many other important nutrients in carbohydrate-containing foods such as vitamins and minerals, so avoiding carbs altogether is not a good idea. Furthermore, carbohydrates are the preferred fuel of a very important organ – your brain! Also, if you don’t eat enough carbohydrates, your body will have to use protein make to carbs (to make up for the missing carbohydrates).

Is a low-carb diet safe and healthy?

Your body needs carbohydrates as a source of fuel (energy). If you don’t eat enough carbs, your body will use stored energy from muscle or fat cells to fuel itself. This is what happens on the recently popular ‘keto diet’. On a diet like this, you would be eating more fat and protein than usual, which may not be the healthiest way to eat long term. Low-carb diets can be high in saturated fat (found in meat, whole milk, cheese, butter, and ice cream), which has known negative health outcomes. There is a concern that a low-carb diet can cause stress on your kidneys, because protein digestion uses stored calcium from the body and requires extra work by the kidneys. Growing teens’ bones need adequate amounts of calcium to grow and be strong. Some health care professionals are concerned about possible long-term risks of a high-protein diet/low-carb diet, and there is not enough research to say they are safe over a long-term time period.

A low-carb diet may help some people lose weight quickly because it limits their food choices so much that they end up eating less. Keep in mind that this weight loss happens because they’re eating less food overall, not because they’re avoiding carbs. Research has shown that low-carb diets are no more effective in promoting long term weight loss compared to other types of diets. Instead of avoiding carbs altogether, try eating a balanced plate and choosing high-fiber carbohydrates such as whole grains, beans, fruits, and veggies instead of refined carbs such as white bread, white rice, candy, chips, or cookies. For example, instead of a plate full of pasta try using whole wheat pasta and decrease the portion to 1/4 of the plate, filling the rest with chicken breast and a salad.

How many carbohydrates should I be eating?

The amount of carbohydrates a person should eat depends on their age, gender, size, and activity level so it is different for each individual. In general, try to follow the MyPlate model and make half of your plate fruits and veggies, and the other half whole grains and protein. If you do this, approximately half of your day’s total calories will come from carbohydrates in the form of fruit, vegetables, grains, legumes, and dairy. Keep in mind that athletes or those who do intense physical activity need more carbs in their diet. Think of the sources of carbohydrate in your meal; if there are several sources of simple carbohydrates (such as the bun on a hamburger, french fries, and a soda), you may be able to decrease the portion of carbs.

What’s the difference between carbohydrates and gluten?

You’ve probably seen some advertisements for “gluten-free” foods and wondered if these are healthy and if they’re different from “low-carb” foods. Gluten is a protein found in wheat, rye, and barley (which are some carbohydrate-rich foods). Some people have a disease, called Celiac disease, which makes gluten harmful to their digestive system. Others have a diagnosed gluten intolerance that prevents them from digesting gluten appropriately. People with Celiac disease and those who have a diagnosis of gluten intolerance must eat gluten-free foods, but they need just as many carbohydrates in their diet as someone without the disease. They can get the carbohydrates their body needs by eating carbohydrate-rich gluten-free foods such as corn, potatoes, rice, and vegetables. Eating a product marked “gluten-free” doesn’t mean that it has any less carbohydrates or that it is any healthier than a product that contains gluten; it’s just made with ingredients that don’t come from wheat, barley, or rye.

What does “low glycemic index” mean?

Combining carbohydrate-rich foods with a food containing protein or fat can lower the glycemic index because it causes your body to absorb the carbohydrate more slowly. For example, if you add peanut butter (protein) to toast (carbohydrate), your blood sugar will not rise as quickly or as much as it would have if you had eaten the toast alone.