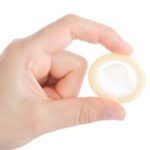 The external (male) condom is a sheath (covering) worn over the penis during sexual activity. It prevents pregnancy by acting as a barrier, preventing semen from entering the vagina so the sperm can’t reach a female’s “egg”. Condoms also decrease the chances of getting a sexually transmitted infection (STI) by acting as a barrier, preventing infections (bacteria and viruses) from passing from one partner to another. Using condoms also allows to be active in preventing pregnancy.

Are there different kinds of condoms?

Yes; condoms come in different sizes, styles, and shapes. Condoms can be made out of latex, polyurethane, or “lambskin” (also called natural). Condoms may be lubricated or unlubricated. Some condoms used to contain spermicides (chemicals to kill sperm), but most don’t. It’s best to use condoms without spermicide.

Even though guys are the ones who wear external (male) condoms, anyone can always keep some on hand if they’re in a sexual relationship. Then you’ll have contraception available, and you can always practice safe sex.

How can I talk with my partner about condoms?

Where can I get condoms?

Condoms can be bought at drug stores, many supermarkets, or online. They’re very cheap (about $.50 – $2.50 each – and cheaper when you buy a lot at a time). You may also be able to get them for free at a school health center, doctor’s office, or a family planning clinic (such as Planned Parenthood).

Does it matter which type of condom I use?

Yes. The best type of condom to use is one made out of latex. It provides the best protection against both pregnancy and STIs. However, if either you or your partner is allergic to latex, polyurethane condoms are still a good option. They provide just about the same protection against pregnancy and also give some protection against STIs, although they break and slip more often than latex condoms. Lambskin condoms are effective against pregnancy, but not effective in the prevention of STIs. It’s up to you to choose whether to use lubricated or unlubricated condoms, although most teens prefer lubricated.

How effective is the external (male) condom against pregnancy?

If a woman has her male partner use a condom every time they have sexual intercourse and follow instructions every time, it’s 98% effective. This means that if 100 women have their partners use the male condom all the time and always use it perfectly, 2 women will become pregnant in a year.

The male condom is most effective against pregnancy when it’s used all the time and always used correctly. If it’s not used perfectly, it’s only 82% effective. This means that in real life, if 100 have their partners use an external condom, but they don’t use it perfectly every time, at least 18 women will become pregnant in a year.

When used all of the time and when used correctly, condoms are good at preventing pregnancy. Most condom failures happen because of improper use. Always make sure you have a prescription for Emergency Contraception (Plan B) or know where to buy it (over-the-counter) from a pharmacy.

How effective is the condom against STIs?

The answer to this question partly depends on which type of condom used and if the condom is used and removed correctly. Latex condoms provide excellent protection against most STIs. Polyurethane condoms also provide some protection against STIs, although more research studies are needed to know how protective they really are. Remember, lambskin condoms don’t protect against STIs. The pores are too large to protect against the small particles that cause some STIs.

The answer to this question also depends on which type of STI. Latex condoms protect against only certain types of STIs. STIs can be spread by sexual activity in a few different ways. They’re effective in lowering the risk of STIs that travel in bodily fluids (blood or semen), such as the HIV/AIDS virus, hepatitis, chlamydia, and gonorrhea.

Condoms are much less effective against STIs that are caused by organisms that live in sores on the genitals, such as syphilis. STIs such as herpes and human papillomavirus (HPV – also known as genital warts) that occur on the genital skin can get passed from one partner to another even if a condom is used.

Most importantly, the effectiveness of a condom against STIs depends on whether the condom is stored correctly and whether it’s used correctly all of the time.

Are there other ways to lower my chances of getting an STI?

Where should I keep unused condoms?

Keep unused condoms in a dry, dark place at room temperature. Extreme heat or cold can weaken the material. Sunlight or humidity can also break down latex, causing condoms to break or tear more easily. Condoms shouldn’t be carried in a wallet or stored in a car glove compartment because the material will weaken and is more likely to break or tear.

How long are condoms good for?

Always check the date on the box. Some condoms are marked by the manufacture date (MFG = manufacture date). You can use these condoms for up to four years after the date of manufacture. Other condoms are marked EXP, which means expiration date. You shouldn’t use condoms any time after the expiration date. If you’re not sure how old the condom is, throw it away and use a new one. Never use condoms that are brittle, sticky, damaged, or an unusual color. Using out-of-date condoms is another reason for condom failure.

How do I use a condom?

Opening the wrapper: Be careful when opening a condom package so that you don’t tear or nick the latex with your teeth, nails, or rings. Don’t unroll the condom before putting it on the penis, because it can weaken the latex and make the condom difficult to use.

Once the condom is out of the wrapper: Gently press out air at the tip of the condom. Make sure to leave space at the tip (about one-half inch) to collect the semen, so it won’t leak out the side of the condom.

Using lube: You can use a water-based lubricant (such as glycerin or lubricating jelly) during intercourse to prevent condoms from breaking. If you put a drop of lubricant (such as KY-Jelly) inside the tip of the condom, you can increase both sensation and safety.

Never use an oil-based lubricant, since it will weaken the latex and make it break. Examples of oil-based lubricants include Crisco, lotion, Vaseline, or baby oil. Medications used to treat women’s yeast infections can also weaken condoms.

Taking the condom off: After a person has ejaculated, he should pull out while his penis is still hard, since the condom can easily slip off when the erection is lost. He should hold the condom at the base of his penis while withdrawing so semen doesn’t spill out. Then he should gently roll the condom toward the tip of his penis to take it off.

What should you do with a used condom?

You should wrap the used condom in a tissue and throw it out in the trash. Don’t flush it down the toilet, since it can clog plumbing. Condoms can’t be reused, even if your partner doesn’t ejaculate, so only use one condom each time you have sexual intercourse.

What if the condom breaks or tears?

First of all, don’t panic – but do have the person withdraw his penis immediately. If you aren’t using another method of birth control such as the Pill, you should strongly consider taking Emergency Contraception to prevent pregnancy. If you can’t get in touch with your health care provider, you can text “HELPLINE” to 313131 or check online. If you think you might have been exposed to an STI, speak with your health care provider.

Other things to remember:

How often do condoms break?

Condoms hardly ever break if they’re stored and used correctly. Proper use depends on the skill and experience of the person using them.

When condoms break, it’s usually because:

Also, using oil-based (rather than water-based) lubricants weakens latex, causing condoms to break. So if you store and use condoms properly, it’s very unlikely that your condom will break.

What if the condom comes off and I can’t remove it from my vagina?

First, don’t panic! This is completely up to you and your comfort level, but it’s possible for you to remove the condom at home. If you want to try to remove the condom at home, begin by washing your hands. Then choose a quiet, comfortable place to lay down. Once you are laying down, take a couple nice deep breathes (as you did before). Begin by taking one clean finger and inserting it you’re your vagina, feel around for the condom. If you are able to feel the condom, insert a second finger and take hold of it. Use the two fingers to help gently pull the condom towards the entrance of the vagina and out.

Now, if you are unable to feel the condom or you’re uncomfortable removing it at home, call your health care provider (HCP). It’s important to tell your provider what is going on so that they can schedule you an urgent appointment. The longer the condom is inside you, the higher the risk for infection

Can people be allergic to condoms?

Some people may have an allergic reaction to condoms, which can be due to spermicide or latex. If you think it might be due to the latex, you should try a polyurethane external (male) (or internal/female) condom. Make sure the condom doesn’t have spermicide on it.

Do I need to use other forms of contraception with the external (male) condom?

It’s a good idea to use two different types of contraception to increase protection against pregnancy. For example, you can use birth control pills and condoms. However, never use two condoms together – doing this causes friction, which increases the chances that the condom will break.

Condoms are the most effective form of protection against sexually transmitted infections. If used correctly 100% of the time, condoms may reduce your risk of becoming pregnant by 98%. Condoms are beneficial for all genders, so it is important to discuss condom use with your partner.