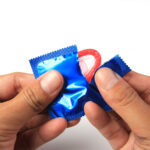 Great question! First, you and your partner will need to learn how to use condoms correctly. This begins with opening up the condom wrapper with care.

Taking the condom off: After a guy has ejaculated (released sperm), he should pull out while his penis is still hard, since the condom can easily slip off when the erection is lost (when the penis becomes soft again). He should hold the condom at the base of his penis while withdrawing so semen doesn’t spill out. Then he should gently roll the condom toward the tip of his penis to take it off.

Lastly, you should wrap the used condom in a tissue and throw it out in the trash. Don’t flush it down the toilet, since it can clog it.