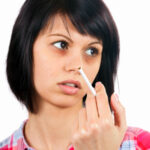 Most teens are aware that people who have smoked for a while can get lung cancer and various life threatening lung disorders, eventually leading to death, but many don’t know about all of the bad things that smoking can do to them right now. If you smoke, you owe it to yourself to find out about the effects of smoking on your life now.

Even small amounts of the poisonous chemicals in cigarettes can do bad things to your body.

Why is smoking unhealthy for me?

According to research done by the CDC (Center for Disease Control), there are more deaths caused by smoking than by all of the following combined: HIV, illegal drug use, alcohol use, car accidents, and firearm-related incidents.

Each day about 4,000 youth under the age of 18 years old smoke their first cigarette, 1,000 of those teens, become daily cigarette smokers. More than 16 million Americans live with a serious illness caused by smoking and on average, smokers die 10 years earlier than nonsmokers.

Each cigarette contains about 7000 chemicals, many of which are poisonous and about 70 cause cancer. Some of the worst ones are:

Every time a person inhales smoke from a cigarette, small amounts of these chemicals get into their blood through their lungs. The chemicals are then transported by the blood to different parts of the body and cause harm. So it is important not to start smoking, and if you have already started smoking then you should quit as soon as possible. It is understandably hard to quit smoking, but there are nicotine replacement products that could be helpful to you. If you are over the age of 18 years old, you can buy nicotine replacement products which come in a variety of forms such as patches, gum, and lozenges. Under the age of 18 years old? A prescription will be needed from your health care provider.

What happens to a person’s lungs when they smoke?

Every time a smoker inhales a cigarette, some of the alveoli (air sacks in the lungs) die. Alveoli are important because they transfer oxygen from the lungs into the blood which then carries oxygen to other organs in the body. This is dangerous because the alveoli won’t grow back so when they are destroyed, part of a person’s lungs will not function anymore. People with lung disease have problems doing physical activities such as sports, dancing, or singing.

Why do people smoke if it’s so bad for them?

Some people like the feeling that smoking gives them. This temporary feeling is from the nicotine in the cigarettes. Some teens think smoking will help them lose weight or stay thin, but this isn’t true.

How do tobacco companies get teens to start smoking?

Think about it this way: When a person decides to start smoking, the tobacco companies are happy because millions of dollars are spent every year on advertising to try to get new people, especially teens, to smoke. Once a person is hooked on smoking, they are forced to buy cigarettes to support their addiction. Ask yourself: Do I really want a big corporation controlling my life and telling me how to spend my money?

Can a person stop smoking if they’re addicted to cigarettes?

Many people don’t realize they are addicted to smoking. They think they can easily quit any time they want. But when they try, they forget it is extremely hard. Unfortunately, it is very easy to become addicted. Cigarettes are just as addictive as cocaine or heroin. Even if you only smoke one or two cigarettes a day and even if you’ve never bought a pack of cigarettes yourself, you are at risk. Stressful situations or hanging out with friends who smoke might cause a person to smoke more and become addicted. If you smoke, try going a whole week without smoking at all. If you find this challenge to be very hard, you are probably addicted to cigarettes.

When is the best time to quit smoking?

A lot of people put off quitting smoking, thinking that they’ll do it when the time is right. However, about 80% of teens who begin smoking now, will continue smoking into adulthood. If you smoke, it will never seem like the right time to quit and quitting will never be easy. The longer you smoke, the harder it will be to stop and the more damage you will do to your body.

Here are some reasons to quit sooner rather than later:

ENDS is short for “electronic delivery system” which includes smoking or “vaping” products such as electronic cigarettes (e-cigarettes), e-pipes, hookah pens, and vape pens. They are made to look like cigarettes, cigars, pipes and/or pens and they typically use liquid nicotine (the same chemical in regular cigarettes) or “e-juice,” and a battery to make a vapor which is then inhaled. Other chemicals including propyleneglycol, glycerin, flavorings, etc. may also be added to the “e-juice.”

It is important to know that the Federal Food and Drug Administration (FDA) (the government organization that tests the safety of cigarettes, medicine, and food) has not studied the safety or efficiency of e-cigarettes, therefore E-cigarettes are NOT safer than regular cigarettes and should not be used for to quit smoking. This new ruling will allow the FDA to test all new tobacco products, identify possible risks, and explain any confusing advertising. All new tobacco products must print the following statement on the product:

WARNING: This product contains nicotine. Nicotine is an addictive chemical.

Additionally, no one under the age of 18 may purchase tobacco products including ENDS.

Smoking has serious effects on a person’s life. The longer a person smokes the more risk for serious health problems. Most people who begin smoking as teens say that they wish they had never started. No one can actually make a person stop smoking, but getting support from friends and family help a lot. If you smoke, just think about how much healthier you’ll feel when you kick the habit!