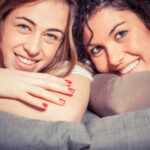 Yes. It is perfectly “normal” for girls to have sexual feelings towards other girls. Sexual attraction, which is part of “sexual orientation,” refers to the gender of a person who we become sexually attracted to. Sexual orientation also includes how we identify our feelings (e.g., “lesbian” or “bisexual”) and who we have sex with. It takes time to understand ourselves as well as our attractions to others. Attractions may also change over time. You may experience attractions toward only girls now and toward both boys and girls later. People who have repeated crushes and/or pleasurable body experiences with other people of the same gender, but have no crushes or pleasurable experiences with people of another gender tend to report being “gay” or “lesbian.” Having one or a few experiences with somebody of the same gender does not automatically make you gay or even bisexual (feelings of being attracted to more than one gender). Sometimes it takes a while to understand our bodies and our sexual feelings towards others. This is all normal.

To learn more, check out “Sexual Orientation – It’s Complicated” on our blog, TeenSpeak.