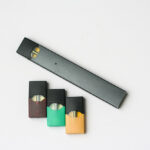 E-cigarettes (vaping) have been around for decades, but it wasn’t until recently that researchers noticed a large increase in their use. Over the past 10 years, vaping has grown and become a popular, but dangerous trend among teens and adolescents. According to the Center for Disease Control (CDC), in 2019 5.4 million youth between the ages of 11 to 18 years old, reported using e-cigarettes regularly.

Vaping is a form of smoking. Electric cigarettes (E-cigarettes) are battery operated smoking devices that have been around since the early 1960’s.  In order for the e-cigarette to work properly, an e-liquid cartridge is required. When the liquid is inhaled, a vapor is produced. Vaping may also be called, “Juuling”, named after a popular brand of e-cigarettes and e-liquid.

Much like the latest smartphones, the new version of e-cigarettes are discreet and sleek. You may think that you have never seen an e-cigarette before, but you would likely be surprised. JUUL pens are known as one of the most popular vaping products among teens and can look like everyday items such as a USB stick, pen, or an inhaler. The discreet appearance allows teens to easily conceal the device at school and at home.

Are there harmful chemicals in e-liquid?

Yes. E-liquid contains the highly addictive chemical, “nicotine” which is the same harmful chemical found in traditional or regular cigarettes. Teens become hooked on the device because they don’t typically realize that e-liquid contains nicotine. It may be possible to buy  e-liquid without the cancer causing chemical, nicotine; however, even nicotine free e-liquid contains other harmful and lung-irritating chemicals such as tin, nickel, and lead.

FACT: Prior to February 2020, many e-liquids were flavored, which was very appealing to teens. Flavors such as apple, cotton candy, mango, mint, that were available for purchase, are now banned in most states
My teen thinks vaping is the safer choice. Is this true?

FACT: Right now, we don’t know the long-term effects vaping may have on a person’s health, but we do know that health care providers have many young patients falling ill to a mysterious and very serious lung illness thought to be caused by e-cigarette use.

Yes. Many teens and adults don’t realize they’re addicted to e-cigarettes and think that they can quit vaping anytime they want. Unfortunately, nicotine (the drug in some e-liquid, smokeless tobacco and cigarettes) is addictive. So even if a person only vapes once in a while, they are at risk of becoming addicted. It can also be difficult to say “no” to peer pressure, especially since vaping has become a popular activity among teens.

What should I do if I think my child is vaping?

If you think your son or daughter is vaping, it’s a good idea to begin by having a calm conversation about the health risks. You could start by talking about how the e-cigarette companies are trying to appeal to young people but that vaping is just as addictive as regular cigarettes. Allow your child to talk about their feelings and answer their questions as best as you can. You may suggest that you both visit the CDC.gov website and read about current studies about the effects vaping has a person’s health. Let them know that you are concerned about their well-being and you are worried that they are at risk of developing a very serious and life-changing lung condition, thought to be caused from vaping.

If your child is experiencing problems with breathing, call their health care provider immediately or take them to the closest emergency room.