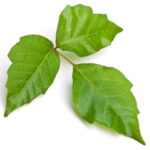 Do you know what causes poison ivy rash? It’s the sap oil that’s made by the poison ivy plant that’s responsible for irritant reactions, called “urushiol”. It’s the same substance that’s found in poison oak and poison sumac plants. If you’ve had a skin rash after coming in contact with one or more of these plants, you may already know that it’s uncomfortable, but not everyone is sensitive to these plants.

What is poison ivy?

Poison ivy is a plant that can cause inflammation of the skin known as “contact dermatitis.” Besides being the name of a plant, when people get the rash, they say “I have poison ivy.” The plant is found around the world, but it usually doesn’t grow in the desert or in high elevations. It usually grows in clusters in the woods, up in trees, and on the ground. Every part of the poison ivy plant; stem, leaves, root, fruit, and sap can cause an allergic reaction or contact dermatitis if a person comes in contact with it.

Have you ever heard the rhyme, “Leaves of three, let them be?” Poison ivy plants are usually green with one stem and three leaves, but the leaves can also be red or brown or green with black dots depending on the weather and season. 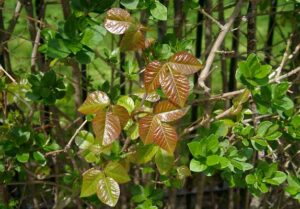 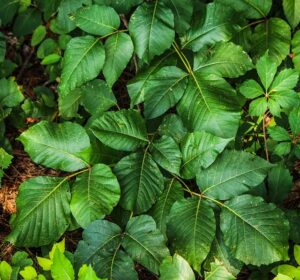 Who is at risk for poison ivy?

Anyone of any race or ethnicity can get poison ivy. People who spend a lot of time outdoors doing activities such as mowing lawns or gardening/landscaping are at a higher risk.

What causes an allergic reaction to poison ivy?

People are at risk for getting poison ivy if they:

How can I tell if I’m allergic to poison ivy?

You can get poison ivy if you come in direct contact with someone else’s skin that still has urushiol on it. However, you can’t get poison ivy by touching someone’s rash, blisters, or liquid from the blisters.

What should I do if I think I have poison ivy?

If you think you’ve come in contact with poison ivy, it’s important to avoid touching your eyes. Wash your skin with a special over-the-counter poison plant wash or use a degreasing soap or detergent. Lather up then rinse well with lots of water.

Once you have the rash:

Treatment: There’s no cure for poison ivy, but there are treatments to help you feel better until the symptoms go away (usually 1-3 weeks).

Certain over-the-counter products will irritate the rash. Do NOT use certain ointments such as antihistamine creams or lotions that contain “benzocaine” (numbing medicine). Also, avoid products that contain neomycin or bacitracin, which are antibiotic ointments.

When should I call my health care provider (HCP)?

It’s important to call your HCP if you have a severe rash, especially if the rash is around your eyes, genitals, or most of your body, if you have a lot of swelling, if any of the blisters look infected (draining pus), or your rash doesn’t go away within 2-3 weeks. If you’re not sure if the rash is poison ivy, make an appointment to get checked.

Can I prevent poison ivy?

When you know what poison ivy looks like, you’ll know how to avoid it when you’re outdoors. Remember, keep away from things that may have “urushiol” (the oil from the poison ivy plant) on them.