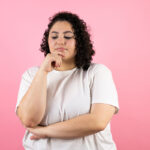 Great question! “Bluetooth periods” is a term for the phenomenon that when young women live and/or spend a lot of time together and their periods start coming at the same time. The Bluetooth phenomenon has been researched several times, but the results aren’t super reliable. Some relate this to the pheromone effect, often associated with animals. Pheromones are chemicals released by animals that influences the behavior of other animals (of the same species). It’s a great thought, but research has shown that the pheromone effect doesn’t exist in humans. So no, the vagina doesn’t have a Bluetooth connection and neither do periods, it’s simply a coincidence.