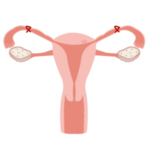 What is tubal ligation?

“Tubal” refers to the fallopian tubes. Ligation means to tie off, cut or close. Tubal ligation involves having minor surgery.

Why are the “fallopian tubes” sterilized?

The fallopian tubes (see picture above) is where an egg and sperm meet, and where the egg becomes fertilized before it moves to the uterus. By closing off the tubes, sperm can’t get to the egg which means that pregnancy can’t happen.

How is female sterilization done?

Female sterilization can be done in an operating room or in a medical office depending on the type of procedure. It can be done while you are sleeping or while you are awake. If awake, you will be given numbing medicine so you don’t feel too uncomfortable. Depending on the type of method you choose to have, you could either have a small incision or cut in your abdomen (belly) or the procedure can be done vaginally (without any incisions or cuts).

Are there any risks or complications with female sterilization?

Complications are rare and are usually from general anesthesia or surgery. Individuals who have other medical conditions that make surgery risky should have a thoughtful discussion with their health care provider about the procedure. There is a low risk of hurting the bowel, bladder or major blood vessel. If an electric current is used to destroy the fallopian tubes, there is a low risk of burning the skin and/or bowel or other internal organs. Other complications include bleeding and infection. The chance of becoming pregnant after being sterilized is rare. However, if pregnancy occurs, an individual is more likely to have a tubal or ectopic pregnancy (this means that the pregnancy is in their fallopian tube instead of in their uterus, which can be dangerous).

What should I expect after the laparoscopic surgery?

You may have symptoms after the laparoscopic surgery including:

After your laparoscopic procedure, you will stay in the recovery room until you are wide awake and able to eat and drink light foods such as crackers and ginger ale. Most individuals go home within 2-4 hours on the same day. You’ll need someone to bring you to the hospital and take you home. Some women may have mild discomfort for a few days. If any of the symptoms below last longer than a couple of days, call your health care provider. Most individuals can go back to school or work within 1 week of having the procedure, but everyone is different so be sure to listen to what your health care provider tells you.

Female sterilization is one of the best methods of birth control available. It’s close to 100% effective. This means that out of 100 individuals who have a sterilization procedure, less than 1 would expect to become pregnant each year.

Female sterilization does not protect against sexually transmitted infections. Using condoms every time you have sex is recommended and greatly lowers the risk of getting an STI.

No. Female sterilization will not change anything such as your sexual performance or your ability to have orgasms. In fact, some women feel more relaxed during sex because they’re not worried about becoming pregnant. Neither you nor your partner will be able to feel the clips or rings that may have been used to seal off your tubes.

Will my periods be the same after female sterilization?

Your periods will likely be the same. Medical studies have shown that individuals who are sterilized may in fact have fewer days of bleeding with their menstrual cycle, have a lighter flow and less menstrual cramps. A very small number of individuals may complain of irregular periods and menstrual cramping after sterilization.

If you have any of the following symptoms, call your health care provider:

What if I decide I want to get pregnant after I am sterilized?

Tubal ligation should be considered a permanent procedure. The majority of women who choose sterilization are happy with the decision, but some women (14%) will ask about reversing the procedure. Reversal of tubal sterilization is frequently not feasible and can be expensive as it is not routinely covered by insurance.

Female sterilization is safe and a good option for some individuals such as young adults who have a very serious medical condition, individuals who know they definitely don’t want any children, and for those who can’t use other types of contraception. It’s also a good method for those who are absolutely sure they do not want any more children. Becoming sterilized is a serious decision that should be considered permanent. Talk to your health care provider or gynecologist if you’re considering female sterilization. It’s important to think about the benefits and risks and have all of your questions answered before making your final decision. If you chose to be sterilized the type of procedure will be based on your medical needs and when you want to have it done. Some individuals are sterilized right after they have a baby or an abortion, while many others choose another time.