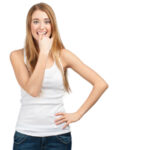 It may seem a strange to be compared to a fruit, but there are two basic shapes that both males and females are often compared to: apples and pears. People with an “apple” shaped figure carry extra weight above their waist, and people with a “pear” shaped body tend to carry excess weight below their waist. So, if you have a “pear” shaped body, your hips are probably wider than your shoulders. The good news is that medical researchers have found that people with “pear” shaped figures are less likely than people shaped like an “apple” to be at risk for heart disease and diabetes.