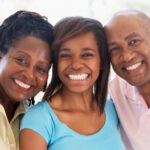 Attention Deficit Hyperactivity Disorder (ADHD) is often diagnosed in childhood, but sometimes it’s not identified until the teen years. Although both males and females can have ADHD, boys are about 3 times more likely to be diagnosed. Externalizing symptoms, like hyperactivity, are more common in boys with ADHD than girls, making the diagnosis more apparent in boys. However, girls show more internalizing symptoms, such as inattentiveness. Girls with ADHD may also struggle with anxiety, depression and emotional dysregulation at higher rates than boys with ADHD. When compared to girls who do not have ADHD, girls who are diagnosed with ADHD may have increased difficulties in the domains of friendship, peer interaction, and social skills and functioning.

Even if your daughter was diagnosed with ADHD as a child, management of the symptoms is likely to change in her teen years because of different academic and social demands. This guide is intended to help you understand and manage your teenage daughter’s ADHD.

ADHD is a neurological condition which makes it difficult  to focus or pay attention. The different categories of ADHD are: Inattentive Type, Hyperactive Type, and Mixed Type. ADHD is a spectrum disorder, meaning that symptoms range from very mild to severe, and vary according to which type a teen has. Those with inattentive type only may have trouble paying attention in school, daydream, or lose attention when in a conversation or doing a task. They may have trouble focusing on homework and get easily distracted. If they also have hyperactivity, they may become restless often and have trouble sitting still. In a young child, this may take the form of not being able to sit still in a classroom and engaging in impulsive behavior. For a teen, this may involve impulsive or risky behavior. Your daughter may also notice an inner feeling of restlessness.

What is executive functioning and how does it relate to ADHD?

Why does my daughter have ADHD?

ADHD may be caused by a number of different things. There is often a genetic component, so a girl with ADHD may have a parent with similar behaviors and symptoms. It’s likely that parents of today’s teens were not diagnosed with ADHD when they were young, but they may recognize some of their daughter’s symptoms as things they struggle with also. Other possible causes of ADHD include head injury, pre-natal conditions, and maternal drug use. Usually there is no specific cause and no one is to blame.

When does ADHD first show up?

It is generally thought that ADHD is present from birth. However, symptoms may not be recognized until much later.  Hyperactivity is often recognized early in school and a teacher may be the first to suggest ADHD. Students with ADHD may be singled out for talking out of turn or being a “class clown.” Those without hyperactivity often go unnoticed in school because they don’t cause trouble. Young people are often mistaken for being unmotivated, not working up to their potential, or being messy and disorganized.

Teens with ADHD who have reached adolescence without being diagnosed will often recognize that they have poor attention and focus, and are too easily distracted. Sometimes teens may get to college or even graduate school without being identified or identifying for themselves that they are having more trouble than is normal. In fact, there are adults with ADHD who have never been diagnosed but have learned ways to adapt and work around their attention problems. Symptoms of ADHD may persist into adulthood or may resolve with growth and maturing.

What are symptoms of ADHD in teens?

Your daughter may exhibit some or all of the following symptoms and behaviors:

What are possible consequences of ADHD?

Is ADHD a Learning Disability?

ADHD is not considered a Learning Disability (LD) although approximately 20 to 30 percent of children with ADHD also have a specific learning disability. However, ADHD can be determined as a disability under the Individuals with Disabilities Education Act (IDEA). This allows your child to receive additional services at school, such as receiving an Individualized Education Plan (IEP).

How can I have my daughter evaluated?

There are many professionals who are considered qualified to diagnose ADHD. You can have your daughter evaluated by:

The most comprehensive evaluation for ADHD is performed by a neuropsychologist who does a series of tests that measure attention, distractibility, and impulsiveness. He or she will also test for general intelligence, memory, learning disabilities, and emotional problems.

How is ADHD treated?

By far the most effective treatment for ADHD is medication. Most medications prescribed for teens with ADHD are stimulants such as Ritalin, Concerta, or Adderall. These medications take effect shortly after ingestion and wear off several hours later. Although you may feel reluctant about having your daughter take medication, it’s important to become educated about their benefits and possible side effects.

Many teens with ADHD can benefit from behavior therapy or various behavioral interventions. These can be helpful whether or not the teen is taking medication. One intervention is to help the teen be more organized by making lists or using an app that helps organize tasks. Another is to break up tasks into manageable time frames, like 15-20 minute segments, so the teen is less likely to lose focus. There is training and/or coaching available for parents, teachers and teens with ADHD. Some strategies are especially helpful because they address organizational problems that are not necessarily helped by medication. Medication can improve your daughter’s ability to focus, but it won’t help him make good decisions.

What are some helpful strategies?

Here are some strategies that may be helpful for those with ADHD:

How can I help and support my daughter?

It’s important to remember that ADHD is nobody’s fault – not your daughter’s and not yours. It may be exasperating to have a daughter who doesn’t seem to pay attention when you’re talking to him, who forgets what you tell him, who can’t settle down, or does risky things without thought of the consequences. Remember that she’s not doing these things on purpose, but she can learn to be more aware of what she’s doing and exert some self-control. It is useful to know that teens with ADHD may need more parental support than you may expect for people their age. They may need help getting places on time, completing tasks and remembering things and they need extra help in learning to do these things for themselves.

You can help and support your daughter by:

Reiff, Michael I. ed, The American Academy of Pediatrics ADHD A Complete and Authoritative Guide, 2004

For parents and kids: Books About Girls With ADHD