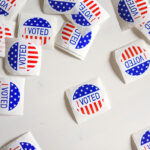 If you are 18 or older and a citizen of the United States, one of your most important responsibilities is to vote. Regardless of your race, religion, sexuality, or gender, you have the right and privilege to make your vote count. Unfortunately, this was not always the case for U.S. citizens, especially for women and minorities. The United States has come a long way in its mission to give everyone (18 and older) the right to vote!

Why is it important to vote?

There are many reasons why it’s important to vote such as having your voice heard. In the United States, voting is considered your civic duty (a right and responsibility as a U.S. citizen). Several countries around the world do not allow some or any of their citizens to vote. However, in the United States, voting is your right. It’s important to remember that your vote matters.

How old do I have to be to vote?

You must be 18 or older to vote in the United States. Many states allow teens who are between 16 to 18 years old to pre-register for voting. Check with your state or local election office to see if you are eligible.

Where can I register to vote and what should I bring with me?

In all 50 states, you can register to vote (in-person) at any state or local government office (such as Town or City Hall), the Department of Motor Vehicles (where you get your driver’s license), Armed Forces recruitment centers (where you would sign up for the military), and any government/county assistance offices (such as SNAP/food stamps or WIC).

Do I have to choose a political party?

No, you don’t have to choose a political party right away or at all. You can register under “no party preference.” If you don’t select a political party, just know that depending on your state, you may not be able to vote in a primary election. In some states, you can tell the clerk at the polling place, which ballots you want that day. A primary election is one that is held to determine who will be the Republican and Democratic candidate.

If I’m not old enough to vote, is there any other way I can become involved?

There are many different ways you can get politically involved. If you support a particular candidate, check out their campaign to see if you can volunteer. Spread the word to your friends, and encourage them to connect with their local polling stations.

It’s important to remember that voting is a personal choice and your right as a US citizen. If you’re unsure who or how to vote, talk to friends and family members, and then form your own opinion.