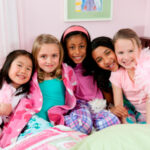 “Tween” is a funny word that describes the in-between time when you are not yet a teenager but you’re definitely not a little kid either.

During your “tween” years you will probably make new friends and you may lose some too. It may feel awkward when some of your friendships change but that’s normal; you’re changing too. Remember, your body isn’t the only thing that’s growing. Your thoughts and feelings are also becoming more mature. All of these things happen at different times and may take a little while for some and longer for others.

After each “Q & A”, you’ll see a story about two friends, and then the “solution resolution” as an example of how the problem might be solved.

Q: Why are friendships complicated sometimes?

A: Even if you have had good times with your friends, it is also normal for friendships to change or become complicated. You can actually outgrow a friendship!

Kate and Angel have been friends since 1st grade. When Angel transferred to another school they hardly saw each other anymore. Angel started hanging out with new kids. They both felt awkward when they did get together. Angel liked being with her new school friends and Kate preferred being with other friends at her school.

Q: I want to meet new friends but I don’t know how. Help!

A: Some people are outgoing and have no trouble making new friends, while others are more shy and find it harder to get to know people. When you want to meet someone, it helps to think of some things ahead of time that you could talk about. You may want to give the person a compliment (say something nice about them) or ask them about school or an activity they do. It may also help if you have a sport or something else in common.

Lulu is new to her school and wants to make friends, but she is shy.

Lulu decides to take a babysitting class. While learning about something she likes to do, Lulu will also meet other girls with similar interests and make new friends.

Q: What can I do hold onto a friendship?

A: Sometimes you may be surprised to find out that a friendship is ending. There are a few things you can do to try to keep a friend. You can try to talk to your friend about your feelings, letting your friend know that she or he is still important to you even though you may not have as much in common anymore. You might try an activity that your friend has become interested in, such as a sport or invite her or him to share a new interest of yours. If there are one or two activities that you both still like to do together, maybe you can plan to hang out once in a while.

Maria and Zoe used to take dance lessons together but Maria decides to quit so she can play field hockey. Zoe feels like she doesn’t have anything in common with Maria anymore but she still wants to be her friend.

Even though the girls won’t see each other in dance class anymore, Zoe decides that she can still spend time with Maria and go shopping or to the movies with her sometimes. Zoe also decides to go to one of Maria’s field hockey games to show support and invites Maria to her dance recitals.

Q: What if my parents don’t like my friends?

A: Parents may like some of your friends, but not others. Sometimes they may feel that a friend may be a bad influence on you. It is worth listening to their concerns. You may be able to reassure them about your friend but they may know something about your friend that you haven’t noticed yet.

Jamie and Louisa became friends when they were working on their science project together. Now they want to hang out after school. Jamie’s parents don’t want her to go to Louisa’s house after school because both of her parents work and there are no adults at the house until dinnertime.

A: Sometimes, friends (even people you have been friends with for a long time) may begin to do things that make you feel uncomfortable, such as shoplifting or trying a cigarette. They may even pressure you to join them. It may be hard, but you will need to decide for yourself about how much time to spend with these friends. It can be uncomfortable to make new friends, but it may be necessary and worth the effort in the long run.

Maddy and Taylor were bored after school. They decided to go into the local dollar store to get nail polish. Taylor didn’t realize that Maddy planned on stealing the nail polish until she slipped a bottle in each of their pockets and hurried Taylor out of the store. Taylor was scared they would be caught but Maddy laughed and said, “See how easy that was? I do it all the time!”

Taylor feels really uncomfortable with what just happened. She decides to tell Maddy that she never wants to do that again and needs a break from their friendship. Taylor decides to tell her aunt what happened and asks for her help to return the stolen nail polish to the store.

Q: Can my best friend be a boy?

A: Friendship is based on common interests, caring and trust, not whether you’re a boy or a girl. But as you get older, you may feel uncomfortable about sharing certain things. Your friendship may go through some growing pains and your parents may set new rules about your friendships with boys.

Alana and Alex have been best friends since they were little. Alana’s parents and Alex’s parents are also good friends. When middle school started, their friendship changed a little. Alana talked to her girlfriends about personal stuff like getting her period and Alex talked to his guy friends about boy stuff. Both Alana and Alex are still the best of friends but Alana wonders how much her friendship will change as they get older.

Q: How do I choose if I get invited to two parties on the same day?

A: Getting invited to more than one party is cool but it can also be complicated. You may sometimes feel like you have to choose one friend or activity over the other. You don’t want to hurt anyone’s feelings but sometimes it’s hard to know what to do.

Sasha’s friends, Kim and Molly are having their Bat Mitzvah’s on the same day but in different Temples. Sasha wants to celebrate with both of them. Sasha realizes that she got Kim’s invitation first and told her she would be happy to attend.

Sasha thanks Molly for her invitation and explains that Kim’s invitation arrived first. She tells Molly she feels badly that she cannot be at her Bat Mitzvah. As a special gift Sasha offers to plan something fun with Molly that they would enjoy doing together, such as going roller skating.

Changes in friendship can be hard, especially while you’re dealing with all the other changes during your tween years. The good news is that it will get easier. The most important thing is to focus on being yourself, even as you seem to change from one day to the next. You might find it helpful to talk to an adult such as a parent, older sister/brother or other relative, teacher, or counselor. After all, every adult was a tween at some point in his or her life! It’s likely that they remember what it was like when they were your age and can offer good advice.