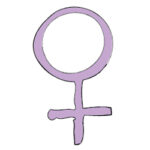 Girls are born with two sets of labia. These are located on the vulva, which is the name for the outer part of a woman’s genitals. “Labia” means “lips” in Latin, and some people use the word “lips” to describe the labia.  The larger outer labia are called the labia majora (pronounced: ley-bee-uh muh-jorh-uh). They are skin filled with “adipose” tissue which is a type of fat that makes the skin look cushiony. During puberty, hair grows on the labia majora. The hair and extra padding protect the thinner and more delicate tissues of the smaller inner labia called the “labia minora” (pronounced: ley-bee-uh mi-norh-uh). Labia minora are usually pink and they do not grow hair. Labia change and continue to grow during the teenage years, so the appearance is usually different for a girl who is 11 or 12 versus the appearance when they are16 or 17, for example. Adult women also often look different from teens, and that is also normal. Labia can further change in appearance after someone has been pregnant and had a baby.

Do all labia look the same?

No. Both the labia majora and the labia minora can vary in size, color, shape and the way they look compared to other females. The labia minora (inner labia) come in all shapes, sizes and colors. The medical term for this is “normal variation.” Similar to other parts of the body, labia become larger during puberty. It is normal for a woman’s labia to look different from their mother’s labia or other members of their family. It is also normal for the same person’s labia to look a little different on the right and left side.  This is also quite normal for all body parts that people have two of, such as breasts, ears, hands, and feet.

What causes one woman’s labia to be larger than another’s?

Is it normal to feel upset about having extra-large labia?

Extra-large, large, medium and small labia are all subjective terms, meaning that it depends on the way you view your body. There is no perfect size, shape or color that labia should be. It can be upsetting to think you may be different from other girls your age but it is also perfectly normal to be accepting of your body, or not to think about the size of your labia at all.

For some girls and women, concerns about how their bodies look can become overwhelming, and can start to affect other areas of their life. If you find yourself unable to stop thinking about your body, or if your concerns impact your ability to go to work/school, spend time with family/friends, or do other things you enjoy, it is important to share that information with a parent, trusted adult and/or a health care provider.

Why do some girls/women have concerns about the size of their labia?

Some girls may feel upset if their labia cause irritation and/or discomfort in the groin area. They may feel that this limits the type of clothing they can wear such as certain styles of bathing suits, or the activities they can do comfortably. Some girls may have seen images in magazines or online that cause them to wonder if their labia are normal as most images don’t represent all of the many different shapes, colors, and sizes of labia. Also, the trend to shave pubic hair has also caused young women to become more aware of the size of their labia, which may look different than the images they see. There is actually no formal medical definition of what is a “normal sized” labia because there is so much variation between people’s anatomy.

What should I do if I have experience discomfort?

Most of the time any discomfort caused from the size or shape of someone’s labia can be managed by wearing looser fitting underpants, jeans, shorts, and perhaps a different style of bathing suit. Some girls may be more comfortable wearing skirts and dresses instead of pants. Applying a topical emollient such as petroleum jelly to the labia can also help prevent irritation and chafing.  Avoid shaving your pubic hair as this will expose the delicate tissue of the labia to increased friction from clothing and may contribute to skin irritation. Leaving some hair on the labia majora is protective and can also cut down on discomfort.

Is surgery ever recommended for discomfort?

Surgery should only be considered when a young woman has completed puberty (usually this means 18 years old or older) and requests treatment based on symptoms that do not improve with changes in clothing styles. Symptoms may include: chronic discomfort in thegroin area, pain with sex, chronic irritation or other symptoms that are emotionally distressing. Both patients and health care providers should know that if unnecessary surgery is performed to alter the appearance of the labia may be considered a violation of federal criminal laws and/or state laws.

The surgery that reshapes one or both labia is called a “labiaplasty.” This is not routine surgery and should only be done by a doctor who has a lot of experience performing this type of procedure. Having a labiaplasty is an emotional decision for most young women. Young women who are thinking about having a labiaplasty should be able to talk to their health care provider openly, and have all of their questions answered before making a decision to have surgery. Most young women accept that their labia are normal and unique and decide not to have a labiaplasty or wait until they are older to decide.

Are there any risks with having a labiaplasty?

Labiaplasty is usually done with general anesthesia (while a person is sleeping), but can sometimes be done with a local anesthetic injected into the skin. There are some risks involved with medicine that is used to put a patient to sleep, though these risks are small. It is possible that having surgery may impact how some women experience sensations during sex. Other risks include bleeding, infection, possible breakdown of the stitches, and/or scarring around the labia and/or need for more surgery. Ask your health care provider to explain these risks. If you are considering a labiaplasty, ask if the clitoral hood (skin covering the clitoris) will be affected. The clitoris is a part of the body that is important for sexual sensation. Also, it’s possible that the results of labiaplasty may not be what you expected. Anyone who has a labiaplasty should follow their health care provider’s instructions after surgery to lower the chance of any complications.  According to the American College of Obstetricians and Gynecologists (ACOG), surgical correction of the labia is not recommended in children under the age of 18. Some exceptions can be made based on individual cases.

If you have concerns about your labia, talk to a parent, trusted adult, and/or your health care provider.