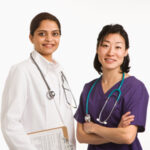 Tdap is a vaccine that helps protect teens from acquiring Tetanus, Diptheria, and Pertussis. Pertussis, otherwise known as “whooping cough,” is caused by bacteria called Bordetella pertussis and spreads easily from person to person. It is a disease that remains common among adolescents and adults, and one that has serious complications.

How is Pertussis transmitted?

A person becomes infected with the pertussis bacteria if they come in close contact with another person who has the disease. The transmission is via respiratory droplets.

Clinical presentation: Pertussis typically starts with cold-like symptoms; a runny nose, a mild fever, and a minor cough. After 1 to 2 weeks, the cough begins to get worse and lasts for many weeks. Those infected often complain of a disruption in sleep and vomiting with severe coughing episodes. The classic symptom for this disease is a “whoop-like” sound that an infected person makes when air is breathed into the lungs, thus the name, “whooping cough.” Other complications that can result from violent coughing episodes include rib fractures, urinary incontinence, and weight loss. Symptoms generally last from 2-6 weeks however coughing can last for over 2 months or more. A person who is infected with pertussis is most contagious during the first 2 weeks after the cough begins. Because the symptoms of pertussis in its early stage mimic a common cold, it is often not diagnosed or treated until more severe symptoms occur, putting many people at a high risk of infection.

Anyone can get pertussis. Babies are at greatest risk since they are not completely protected from pertussis until they get all their pertussis shots. It is recommended that pregnant women get the vaccine between the 27th and 36th week (of pregnancy) so they can pass antibodies against pertussis to their babies. By 15 to 18 months, a child should have received four pertussis shots (DTaP) with a fifth one just before starting school. Teens and college students living or spending time in close quarters such as dormitories, camp, or in classrooms, are considered at high risk for getting pertussis. School nurses and other health care providers who work directly with students and patients are also at higher risk of pertussis exposure and therefore should get a dose of Tdap.

In the early 1940s, before the vaccine was available, about 200,000 people in the United States acquired pertussis each year. After people started getting vaccinated, the numbers decreased. Since then, however, the number of teenagers and adults getting pertussis has increased. This is likely due to the fact that the vaccine from childhood becomes less effective over time. According to the CDC, in 2012 there were approximately 16 million cases of pertussis reported worldwide. More than 48,000 cases were reported in the United States alone, yet many more cases go undiagnosed and hence, untreated.

How can teens and adults protect themselves from getting pertussis?

According to the CDC, “The most effective way to prevent pertussis is through vaccination with DTaP for infants and children and with Tdap for preteens, teens and adults—protection from the childhood vaccine fades over time.” The FDA approved the Tdap (Tetanus, diphtheria, acellular pertussis) vaccine in 2005. It is a vaccine created for teenagers and adults to prevent three different bacterial infections: tetanus, diphtheria, and pertussis. Tdap is a booster shot, that will protect teens against infection only if they have received the first series of pertussis shots, called DTaP (Diphtheria, Tetanus, acellular Pertussis), when they were younger.

If someone gets pertussis do they acquire lifelong immunity?

Having a pertussis infection does not necessarily give a person lifelong immunity. It is still very important that a person receives the Tdap vaccine. Even an individual with a history of pertussis should be treated if they come in contact with an infected person.

DTaP is the pertussis vaccine most teens received as an infant and young child. Unlike the Tdap booster shot, DTaP is stronger and given in five different shots at 2 months, 4 months, 6 months, 15-18 months of age, and just before starting school (age 4-6 years). It is necessary to get the DTaP vaccines as a child to help make antibodies that target pertussis.

The DTaP vaccine is composed of “inactive” pertussis bacteria. When a person gets the vaccine injection, the body begins making antibodies to fight the inactive bacteria.

At what age should the Tdap booster vaccine be given?

How many Tdap shots does a teen need?

Most teens only need a single booster shot if they already had the first series of DTaP vaccines as a baby and young child. Before giving the Tdap booster shot, the health care provider should review the teen’s immunization record if possible to be sure that the first five DTaP vaccinations were given.

How long is the pertussis vaccine effective?

It is not known exactly how long the Tdap booster shot will protect a teen or adult from pertussis. Although the vaccine does not prevent pertussis 100% of the time, it will greatly decrease the chance of getting a pertussis infection.

It is recommended that anyone who comes in close contact with someone with pertussis (regardless if they received the Tdap vaccine or not), they should contact their health care provider to determine if antibiotic treatment is necessary.

Are there any side-effects?

Most of the discomforts following the administration of the Tdap vaccine are considered mild and temporary. Sometimes, however, the discomforts can interfere with activities, thus requiring medical attention, such as a fever over 102°. Severe allergic reactions such as hives, difficulty breathing, wheezing, or dizziness requires immediate medical attention.

Possible side-effects of the Tdap vaccine:

The U.S. Department of Health and Human Services has set up a Vaccine Adverse Event Reporting System (VAERS). For more information contact: 1-800-822-7967 or vaers.hhs.gov.

Is there anything I can do to help an adolescent who may have had a serious complication from a vaccine?

Serious adverse events to vaccines occur in approximately 1 out of every 1 million people (who have received the vaccine). A person is much more likely to have life- threatening complications from pertussis and other diseases than they are to have a severe reaction from the vaccine. The Federal government has established a program to help pay for the medical expenses for children who have had a serious reaction to a vaccine. For details, contact the National Vaccine Injury Compensation Program online or call: 1-800-338-2382.

Is there any reason for a teen to wait or not get the Tdap vaccine?

Most teens can get the Tdap with no problems.

The following circumstances suggest when a teen should wait or not get the vaccine:

Is there anything I can do to encourage teens to be involved with their immunization and well visits?

Yes, you can teach teens to be actively involved in their health! One way of doing this is by encouraging them to ask about their immunization record, especially if they will be going to college soon and managing their health.

Sample questions they can ask their health care provider include:

What are the types of pertussis vaccines and how are they administered?

Before administering any vaccine ask about the adolescent’s immunization history, medical history, current health issues and specifically ask if they have ever experienced any “type of reaction” or adverse event with vaccines in the past.

Pertussis is a serious illness that can usually be prevented with a vaccine. Adolescents should be encouraged to see their health care provider regularly and keep their immunizations up to date.