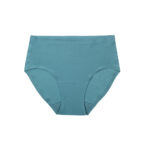 Are there other period products available besides tampons and pads?

Yes. If you are looking for a reusable period , you may want to consider period underwear. Unlike tampons and pads that can only be worn once, most period underwear can be washed and used over and over again.

What is period underwear?

Period underwear are a new eco-friendly period product that is both reusable and absorbable. The idea behind the underwear is similar to that of a pad, but one that is more comfortable. In the lining of the underwear, there are many thin layers of material, which traps blood, while preventing moisture from coming in contact with your skin and vagina. The amount of the blood the underwear can hold depends on the type you buy. Typically, period underwear absorbs a light to moderate flow (or as much as 1-2 tampons); however, it all depends on the type you choose and the amount of your flow. Period underwear looks exactly like a regular pair, and they are available in a variety of colors, patterns, and styles. One company has even designed a pair of period athletic shorts.  Many people are swapping out their one-time use pad or tampon for a pair of stylish period underwear for the convenience and the fact they are reusable.

Can I wear a tampon or cup with period underwear?

Yes, you can absolutely wear a tampon or cup with them. Many people may wear the underwear for added protection from possible leakage.

Can I wear a pad on top of my period underwear?

Technically, you can wear a pad on top of your underwear; however, period underwear were designed to replace the use of a pad. The pad may also prevent the underwear from working properly to trap blood.

Will there be an odor (smell)?

Be sure to change and clean your period underwear at least every 12 hours or sooner. The longer you wear them, the more blood they collect, and the more likely there is going to be an odor. Many of the brands come with an antimicrobial layer to help minimize any odor. Changing them more regularly and wearing cotton/breathable clothing can help as well. It’s important to shower and clean your vulva (outside of vagina) at least once a day, especially during your period. Do not use feminine hygiene deodorants as they can cause irritation of the vulva.  It’s completely normal for periods to have a slight smell; however, it’s important to remember that if you have an unusual odor coming from your vagina that’s different for you, you should call your health care provider (HCP).

Yes, there are several companies that have created period athletic shorts, swimwear, and leotards. When you are swimming you can either wear period underwear under a bathing suit or buy special period swimwear. If you choose to wear a period leotard for dance or gymnastics, remember to wear your tights over your leotard, so it works properly.

Can I wash my period underwear?

Washing instructions may vary depending on the brand of period underwear. Be sure to read the instructions before you wash them. However, most say it’s ok to wash them either separately or with other clothes in cold water, then hang dry.  There are also some brands that are disposable, so again be sure to read up!

What else do I need to know about period underwear?

You can buy period underwear online or at most department stores. Unfortunately, period underwear can be pricey. Each pair can cost between $10-$65 depending on the brand and style. Usually, the disposable underwear is the more affordable option, but that can defeat one of their benefits of being eco-friendly and reusable. However, investing in a couple of pair of reusable period underwear may end up being cheaper than buying 1-2 boxes of tampons or pads each month.

Period underwear can be used instead of pads or tampons. They cost more initially; however, they are reusable and may be more comfortable and cost less over time. Using period underwear during your period is a personal choice.