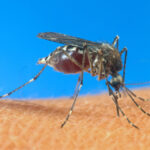 If you live in an area where there have been cases of the Eastern Equine Encephalitis virus (EEEV), you may have heard about it on the news. Although it is rare, EEE is very serious. People who are infected with the EEEV become very sick and can die of complications; however, there are things you can do to protect yourself.

EEE stands for Eastern Equine Encephalitis, also known as “Triple E.” You can’t get EEE from another person. It’s a virus that is caused by an infected mosquito. The infected mosquito has to bite a person to infect them. However, not all mosquitoes carry EEE. The ones that do are found in certain areas.

Who is a risk for getting EEEV?

What are the symptoms of EEEV?

Symptoms usually start about 4-10 days after being bitten by an infected mosquito.

How can I protect myself from EEE?

The best way to lower your risk of getting EEEV is to avoid getting bitten by mosquitos.

What else should I know about EEE?

Other medical conditions can cause similar symptoms as EEE, that’s why it’s important to talk to your health care provider whenever you’re feeling sick or have a fever, bad headache, nausea and vomiting or other symptoms such as feeling very tired or not like yourself.

EEE remains a serious health risk for anyone living, working or playing in affected areas until there is a “hard” freeze or frost, not just a brief time when the weather is <32֯. Practicing ways to protect yourself will greatly lower your risk of coming in contact with mosquitoes that carry EEE. Talk to your health care provider and find out about the areas in the United States that have been affected.