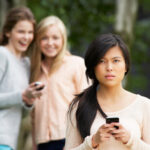 The terms “bullying” and “cyberbullying” are used to describe the same unwanted, mean behavior towards another person: if someone is threatening, harassing, or humiliating another person, they are being a bully. The big difference is that bullying happens in person, while cyberbullying happens online (via email, instant messaging, text, social networking sites, or other mobile apps and websites).

Bullying and cyberbullying are mean behaviors that:

Bullying and cyberbullying are not:

What  counts as bullying and cyberbullying?

Bullying and cyberbullying can happen face to face, or behind someone’s back. It can also involve actions that border on discrimination, whether it’s about sexuality, gender, race, class, or something else.

Bullying can take many forms, including:

Cyberbullying can take many forms, including:

It can be difficult to escape cyberbullying, since we live in a connected society where we spend a lot of time using technology. It can also be hard (but not impossible) to figure out who is doing the cyberbullying online if the person is doing it anonymously.

Bullying and cyberbullying aren’t totally different things. They’re examples of the same kind of behavior — with the same social, cultural, and human roots — in different contexts. It’s often hard to separate bullying and cyberbullying, since your experience of the online and offline worlds are so closely connected. For example, many online victims know their bullies in real life (although they might only be bullied by him or her online). Conflicts dealing with relationships that start out offline may carry over to social media sites, through text messaging, etc., or vice versa, and escalate or turn into cyberbullying. For example: A prank pulled in the locker room at school results in ongoing social humiliation through pictures shared online. Another example could start with a nasty Facebook post that leads to bullying at school.

It’s important to keep in mind that conflicts that start out as jokes, misunderstandings, or arguments can escalate and lead to ongoing bullying situations.

What roles do people play in bullying?

Different roles include the bully, victim, bully-victim, and bystander. However, these roles aren’t always clear-cut. For example, bully-victims are people who are victims, but also bully others. Bystanders observe an act of bullying happening to someone else.

Regardless of what role a person plays, being involved in bullying both online and offline is connected with certain negative psychological, social, and academic consequences, including low self-esteem, trouble with sleeping, relationships problems, depression, and less success in school.

Other things to know about bullying at school:

“Trolls,” or people who “troll,” are users who purposefully post inflammatory or controversial comments in order to provoke other users and create arguments. The best way to deal with trolls is to ignore them. If you respond to their comments, you will encourage them to continue posting rude or hateful posts. If a troll is posting repeatedly or making rude or offensive comments, you can also report them to the hosting site, and they may be removed or forbidden from making future comments.

What should I do if I’m being cyberbullied?

Instead of responding to the cyberbullying, save the messages or inappropriate pictures or videos. You can also take a screen shot while the bullying is going on, because the bully may be able to delete the offending message or picture at any point. Tell an adult what happened or seek support from a close, trusted friend. In extreme cases, it may be necessary for you to report a bullying/cyberbullying situation to school officials and/or the police.

If this happens, you should be ready to answer the following questions:

You can also report abuse to the online application that was used to deliver the harassing behavior. For instance, if someone is repeatedly posting mean comments about you on Facebook, you can report the comments as spam, and secure your account to prevent the bully from contacting you. If someone is sending e-mails to your Gmail account that violate Gmail policies, fill out the form to report the abuse. Remember that you can usually block and filter users from contacting you by adjusting your privacy settings.

If you or someone you know is being bulled, speak up! Below are some resources with tips on how to handle bullying and cyberbullying:

Stop Bullying on the Spot

If you or someone you know is feeling severely depressed or suicidal as a result of bullying, get help right away! Tell an adult and go to the closest emergency room. You can also contact the National Suicide Prevention Lifeline, and read more in our Suicide Prevention health guide.