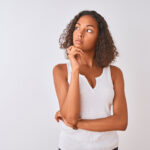 Thank you for your question. Yes, it’s possible to become pregnant ANYTIME you have unprotected sex. Even though you only had intercourse for a few seconds and your bf did not ejaculate and release “semen”, it’s possible that “pre-ejaculation” was released. Pre-ejaculation or “pre-cum” is a fluid that can contain sperm from previous ejaculations. Most men have a small amount of pre-ejaculation before they have an “orgasm”, (when they release a larger amount of fluid called “semen” that contains millions of sperm). Although your risk of pregnancy is lower, it is still risky not to use protection.

The withdrawal or “pull-out” method (when a man withdraws his penis completely from the vagina before ejaculating) is considered a risky method of contraception. Of 100 women using this method, 22 will get pregnant! Condoms used perfectly are 98% effective in preventing pregnancy as well as most sexually transmitted infections. There are also other birth control methods available such as the Pill, diaphragm, IUD, monthly injections (Depo-Provera) and implants such as Nexplanon. Talk with your health care provider to find out what birth control method is right for you. If you think you may be pregnant, it’s very important that you schedule an appointment with your health care provider as soon as possible.