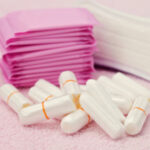 When a woman becomes pregnant, she no longer has a period until after she gives birth. Spotting or light bleeding during early pregnancy can be due to implantation (when the fertilized egg attaches to the wall of the uterus), but bleeding can also mean that something is wrong. Any bleeding during pregnancy should be reported to your health care provider.